Outlander fans got a wee dram to hold them until the Season 3 premiere with a panel at San Diego ComicCon, plus plenty of adorableness from the cast and Diana all over Instagram and various interviews. Spoiler alert: Sam and Cait are still hot, and doing that whole “we’re-not-an-item-but-we’re-going-flirt-and-touch-each-other-for-the-fans” thing 😛 Also, Tobias got to talk sometimes lol. SDCC was followed by Costume College —why are all the fun things so far away? Would love to one day be able justify a flight to California for a weekend of sewing and costuming classes!

But until then, I’m going to keep sewing and share my top 7 gowns from S2 to get us through! Season 3 premieres September 10th, and then in October I’ll be at NYCC so this fall is going to be fun. I’m going to breakdown the look for you by looking at what type of gown it is, how historically accurate it is (and if not, how to make it accurate), and suggested patterns and fabric to make it for yourself! Plus, each look will have it’s own Pinterest board for source images, extant garments, and inspiration.

But not only are these the costumes I wish would magically appear in my wardrobe, I also selected styles that represent the different silhouettes seen in the 1700’s. Despite taking place at very specific point in time, the S2 dresses often go way past 1745. I’m not a purist, but I do dislike shows that go all over the place without rhyme or reason (or just invent nonsense). A film or tv production has various constraints that affect every costume endeavor—including budget, time, and available materials—but the ability of clothing to further the story means that what is historically accurate may not always be the best choice. Terry Dresbach manages that balancing act really well, considering the thousands of garments she and her team constructed.

Here’s my ranking of the outfits—and no, they’re not all Claire, and no, the red dress is not first. Please feel free to disagree in the comments 😉

And the inspiration, Christian Dior’s famous Bar Suit from 1947:

Sketch of the Bar Suit from Dior: the New Look Revolution. 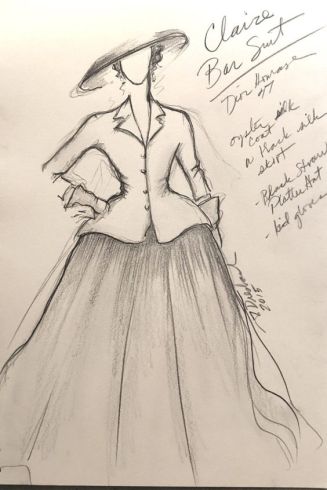 Dior’s New Look was a return to femininity after the lean years, both literally and figuratively, of the 1930’s and 40’s. The Great Depression followed by World War II meant many women came of age not having a large wardrobe, and experienced fabric and supplies rations while they went to work for the war effort. The slender bias cut gowns of the 30’s had more curve than flapper dresses, but emphasized long lines.

The 40’s gave more structure with padded shoulders and gathered sleeves, a rather conical brassiere, and nipped in waistline, often accented with a belt. But the skirt shape is mostly straight and the hip curve comes from the woman’s own shape, not an undergarment. After the New Look we see that famous 50’s and early 60’s silhouette of full bust with bullet bra, waist cincher, and crinoline. 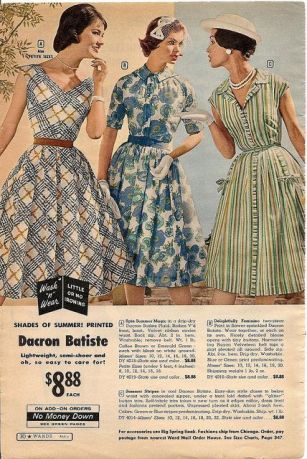 The fashion revolution’s name comes from what Harper’s Bazaar Editor-in-Chief Carmel Snow exclaimed after the show: “It’s a new look!” And funnily enough, Hubert de Givenchy noted that it was the skirt, and not the exaggerated jacket shape, that astonished and even upset women with its generous fabric and increased length. “We built airplanes and we want to show off our gams!” said American women. These modern Rosie the Riveter gals didn’t want to cover up their legs like their mothers did. Plus, the yards of fabric needed for a midi length pleated skirt must have seemed extravagant in light of the hardships of Nazi-occupied France. But women started adding fabric to their skirts to make them more full and the style took off.

Terry Dresbach pulls off this look by going forward to go backwards—I know, I know, but indulge me a moment. Dior was looking back at a time of heightened femininity, French power, and extravagance. It’s easy to imagine the draw of escaping the reality of rebuilding Europe by tapping into the glamour of Marie Antoinette at Versailles. Once you see the parallel in the designs of the late 1940’s and 50’s, you can’t NOT see it. I swear it was like straight up Beautiful Mind epiphany when I got the connection. “Yes, yes of course! Crinolines came into style because of the panniers.. and those hats look just like bergeres!” with sewing patterns swirling around my head like string theory.

Christian Dior was specifically influenced by the 18th century riding habit, and it’s really evident in the above images. On the left is “Portrait of a Lady in a Riding Habit” by Enoch Seeman (c. 1740-45), and on the right a Dior satin jacket with fur trim and matching skirt. Fur trim is often seen in portraits of upper class women.

Making this connection, Dresbach then uses the Bar Suit to create an oyster silk charmuese or duchess satin riding habit with contrasting skirt or petticoat. A riding habit would have been made of wool (for actual riding and hunting) or silk with a skirt in matching fabric, not the mixed colors used here. The jacket would have had pockets and braided and/or lace trim, with a waistcoat underneath that might have been shown by wearing the jacket unbuttoned. The sleeve depends on the year, but cuffed sleeves are common. Claire’s jacket has a historically accurate horizontal bust dart and some intense box pleats which look like they’re doubled up. 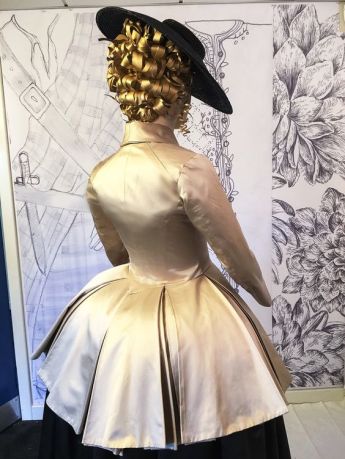 How to Make It

Now for the fun part: how to make it! Cosplay, i.e. an exact replica, will require creating an original pattern from an existing riding habit. You can also make a historically accurate (aka HA) riding habit by adding pockets and trim, plus a matching oyster satin petticoat. Here’s my breakdown of what you’ll need:

Stays and shift: See Corsets and Crinolines (Diderot and half-boned stays), Butterick B4254 (View A or B), Simplicity 8162, or Reconstructing History

Unlike a navy wool jacket, delicate ivory satin is going to show any wonky stitches and is prone to pulls and pin marks. I wouldn’t recommend tackling this unless you have some knowledge of tailoring, such as pad-stitching a collar, to ensure to that the finished jacket has the correct shape and fit. Since the jacket will require a lot of expensive silk, I would go with poly for the skirt because a) it will be cheaper, b) black won’t look any different, and c) the skirt is likely to get dirty on the bottom anyway.

As promised, each look will have it’s own Pinterest board for source images, extant garments, and inspiration. Here’s the Dior 1740’s Bar Suit board!

Up Next: #2 – Emerald Brocade Robe a la Piemontese!

Virginia gal living in NYC. Sewing, books, comics, and old musicals are my jam. View all posts by calnyc

Outlander inspired me to try historical costuming, and now I can’t stop buying fabric. Follow along as I sew from my tiny New York apartment!
Read More.

“Oh, there’s a seat here, Your Grace!”
“So you can paint a squirrel on it?”
Happy Monday friends! Here’s a Tiktok BTS. Yes, she did lay down and act like it was a perfectly appropriate nap spot 🤷🏼‍♀️
I loaned my first stays to a friend, and this is the first time I’ve worn them in two years! Needless to say, I was glad they still fit 😂 These stays are a little too short and too big in the waist, so I don’t wear them with my 18th century outfits anymore. But they make for a great Ren Faire wench/barmaid look! The colors look perfect with my olive petticoat, but sadly I have a no silk at Ren Faire rule—it is just far too likely someone will spill mead or beer on you, and I just wouldn’t be comfortable doing all the fun stuff like archery or watching a show on a rough wooden bench. Okay, let’s be honest—I’m the one most likely to drop some greasy turkey leg in my lap! Fun for a little Tiktok Tudor/Bo Burnham mashup, though.
Looking forward to checking out the @costubesymposium videos this weekend! Here’s my #cosyhatgala contribution because I’m feeling the spooky season now. Also, there will be a video on jumps, like the ones I’m wearing!
This sleeve ruffle took two Poirots, so about 3 hours. I just finished rewatching all of Miss Marple, so it’s back to Hercule Poirot and the ever elegant Ms. Lemon. “Ah, but this rolled hem is superb, mon ami!”