My previous post touched on my love of historical costuming, but it was the release of the American Duchess Simplicity patterns got the ze little grey cells working. After reading Lauren and Abby’s blog (and so many others!) I felt like I knew enough about the process and construction to take the plunge. I received lots of sewing-related birthday presents, so with pretty new pair of Gingher shears and a fabric gift card I started getting supplies.

I want to start off by noting that although I am in awe of completely hand-sewn, historically accurate gowns, I will be sewing 21st century style by machine. I’m only hand sewing where required—mostly because as the mom of a preschooler it would take me years to do this by hand! I would like to wear this before the next Olympics. Or Adele album. Or new Pixar movie—or however you note the passage of time.

Between mommy duties and chores there is not much free time for sewing. (Well, there could be more, but letting your toddler watch 7 straight hours of TV is generally frowned upon.) For me, “getting started” meant a few nights and afternoons of taping up and cutting out the pattern pieces. Then a couple nights pining and cutting out all the undergarment pieces. So you could certainly finish this project much faster than me–please don’t be deterred by my timeline! The American Duchess patterns are very well done and make each step easy to follow, plus they have pattern hacks on their blog for making it more historically accurate. My progress has really been impacted by time spent sewing, not difficulty—not at all what I expected!

Costumers say to start working “from the skin out,” and you really have to when sewing 18th and 19th century clothing because the foundations alter your shape so much that your garment simply won’t fit or hang right. You know that test taking strategy where you do the easiest part first to build your confidence and leave more time for the harder stuff? Well, I made the bum pad first–it’s basically a butt pillow ;).

The bum pad gives you that exaggerated rump all the gentlemen go crazy for! Thankfully the bum pad is more lightweight and faster to make than panniers. (Although if you want to make the court gowns from Outlander S2 you’re going to need panniers.) I struggled to find extant bum pads from the mid-1700’s, but did find some from the 1800’s: 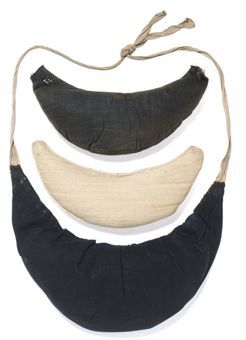 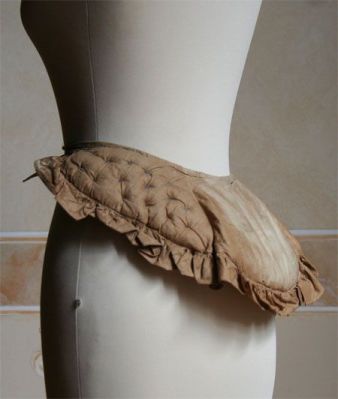 The three on the top are similar to what we see on Claire, and the one on the bottom with three sections and a ruffle is very similar to the Simplicity pattern. Although I haven’t seen another bum pad with that sort of tufted seat cushion look before!

This was very straightforward so even though I lost the few process photos I had you’re really not missing much. I made it from a natural muslin scrap and white quilting cotton I had in my stash. So it’s a two-tone bum pad, but no one will see it. Plus, piecing and not wasting any fabric was common practice in the 18th century because fabric was very costly and made in thinner widths so I think it makes it more historically accurate! I can picture Jenny using some leftover fabric to make a bum roll and stuffing it with bits of wool and tiny cloth scraps from sewing for Ian and wee Jamie. 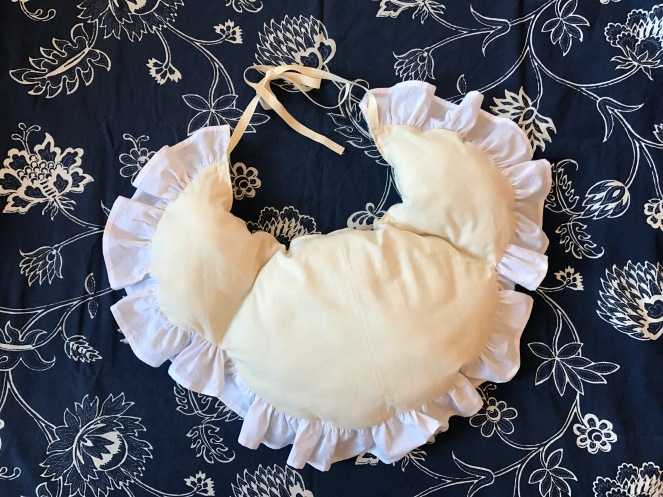 The only not-so-great part was the long narrow hem on the ruffle. I don’t have an ironing board (no place to store it in our little apartment) so part of the narrow hem frustration was trying press a skinny strip evenly on my make-shift ironing station.

Also I accidentally did one ruffle section wrong side out and had to get the seam ripper (womp womp). I’ll admit I looked at it for bit thinking “Well it will be under my clothes and no one will ever see it…” but I knew it would bother me. Leave it to me to make mistakes on the “self-esteem boosting” easy part! It was a little fiddly getting the gathers to go evenly around the curved edges, but overall a quick and easy project. Rump padding: check!

I'm challenging myself to complete an Outlander-inspired 18th century outfit. Follow along as I sew from my tiny New York apartment!
Read More.